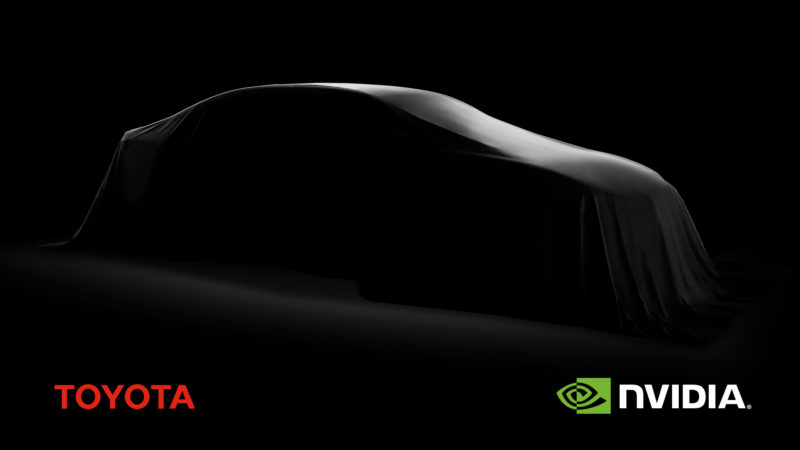 Nvidia announced on Wednesday that it is collaborating with Toyota to deliver artificial intelligence hardware and software technologies that will enhance the capabilities of autonomous driving systems planned for market introduction within the next few years.

Toyota will use the NVIDIA DRIVE PX AI car computer platform to power advanced autonomous driving systems planned for market introduction. Engineering teams from the two companies are already developing sophisticated software on NVIDIA’s high-performance AI platform that will enhance the capabilities of Toyota vehicles, enabling them to better understand the massive volume of data generated by sensors on the car, and to handle the broad spectrum of autonomous driving situations.

The DRIVE PX platform fuses data from cameras, lidar, radar and other sensors. The system can then use AI to understand the 360-degree environment surrounding the car, localize itself on an HD map and anticipate potential hazards while driving. In addition, the system software receives updates over the air, so the car can become smarter and smarter over time.

The scalable architecture is available in a variety of configurations. These range from one passively cooled mobile processor operating at 10 watts, to a multi-chip configuration with two mobile processors and two discrete GPUs delivering 24 trillion deep learning operations per second. Multiple DRIVE PX 2 platforms can be used in parallel to enable fully autonomous driving.

“Toyota has worked on autonomous driving technologies for over 20 years with the aim of reducing traffic fatalities to zero as an ultimate goal, achieving smoother traffic, and providing mobility for all,” said Ken Koibuchi, executive general manager at Toyota. “Through this collaboration, we intend to accelerate the development of autonomous driving systems that are even more safe and capable.”

“We envision a future society where autonomous vehicles whisk people safely and comfortably around beautiful cities,” said Jensen Huang, chief executive officer and founder of Nvidia. “The development of a self-driving car is one of the greatest technical challenges that’s ever been tackled.

“We’re combining breakthroughs in AI and high performance computing to build Nvidia DRIVE PX, the brain of the autonomous car. Today’s announcement with Toyota is the strongest indication that this autonomous future will soon become a reality,” he said.

AI, and specifically deep learning, has become an important tool for the development of self-driving vehicles, particularly because of its ability to recognize and handle the nearly infinite number of scenarios encountered on the road.

Autonomous vehicles require an onboard supercomputer to process and interpret the data from all the sensors on the car. While many prototype vehicles contain a trunk full of computers to handle this complex task, the Nvidia DRIVE PX platform equipped with the next-generation Xavier processor will fit in the user’s hand and deliver 30 trillion deep learning operations per second.

Nvidia showed at its ongoing GPU Technology Conference how the company is advancing the iterative design process to accurately predict final renderings by applying artificial intelligence to ray tracing. Ray tracing is a technique that uses complex math to realistically simulate how light interacts with surfaces in a specific space.

The ray tracing process generates highly realistic imagery but is computationally intensive, and can leave a certain amount of noise in an image. Removing this noise while preserving sharp edges and texture detail, is known in the industry as denoising.

Using Nvidia Iray, the company showed how it is the first to make high-quality denoising operate in real time by combining deep learning prediction algorithms with Pascal architecture-based Nvidia Quadro GPUs. It’s a complete gamechanger for graphics-intensive industries like entertainment, product design, manufacturing, architecture, and engineering. The technique can be applied to ray-tracing systems of many kinds. Nvidia is integrating deep learning techniques to its own rendering products, starting with Iray.