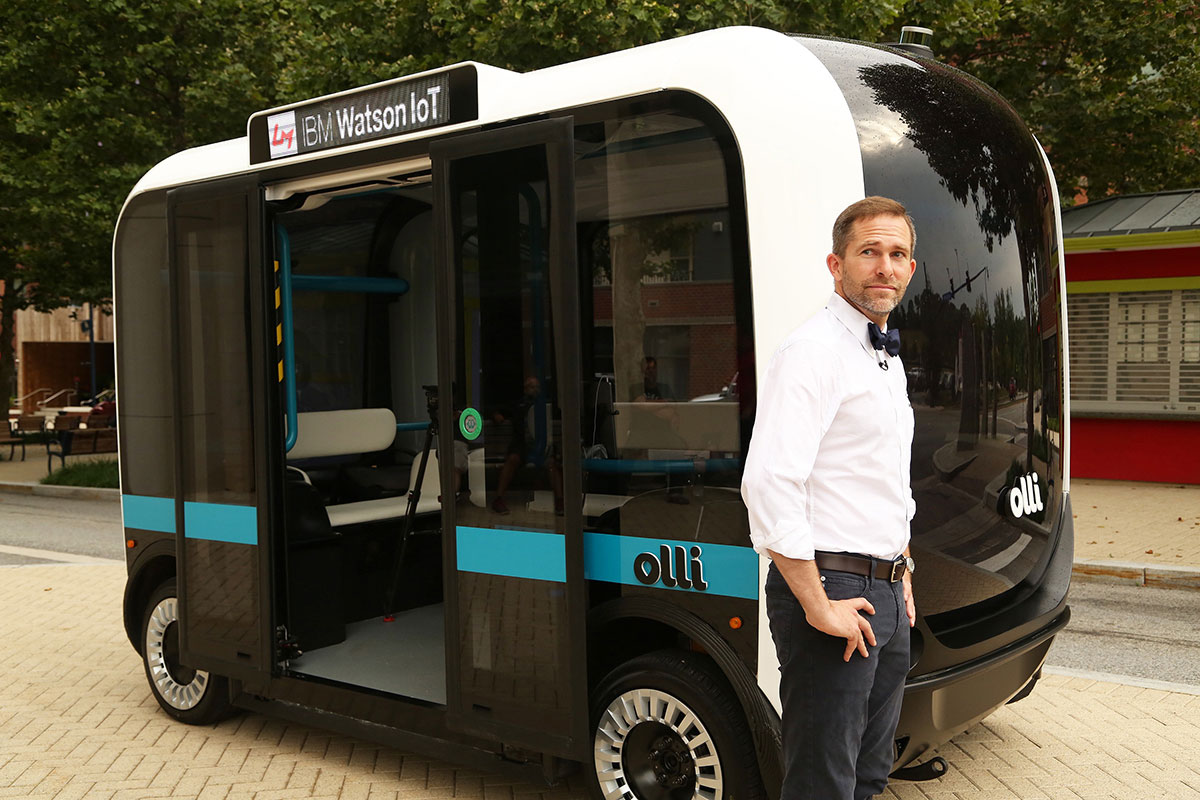 The electric vehicle, which can carry up to 12 people, is equipped with advanced vehicle technology, including IBM Watson Internet of Things (IoT) for automotive, to improve the passenger experience and allow natural interaction with the vehicle.

Olli will be used on public roads locally in DC, and late this year in Miami-Dade County and Las Vegas. The vehicle utilizes cloud-based cognitive computing capability of IBM Watson IoT to analyze and learn from high volumes of transportation data, produced by more than 30 sensors embedded throughout the vehicle.

“Cognitive computing provides incredible opportunities to create unparalleled, customized experiences for customers, taking advantage of the massive amounts of streaming data from all devices connected to the Internet of Things, including an automobile’s myriad sensors and systems,” said Harriet Green, General Manager, IBM Watson Internet of Things, Commerce & Education. “IBM is excited to work with Local Motors to infuse IBM Watson IoT cognitive computing capabilities into Olli, exploring the art of what’s possible in a world of self-driving vehicles and providing a unique, personalized experience for every passenger while helping to revolutionize the future of transportation for years to come.”

Passengers will be able to interact conversationally with Olli while traveling from point A to point B, discussing topics about how the vehicle works, where they are going, and why Olli is making specific driving decisions.

Watson empowers Olli to understand and respond to passengers’ questions as they enter the vehicle, including about destinations (“Olli, can you take me downtown?”) or specific vehicle functions (“how does this feature work?” or even “are we there yet?”). Passengers can also ask for recommendations on local destinations such as restaurants or historical sites based on analysis of personal preferences. These interactions with Olli are designed to create comfortable, intuitive and interactive experiences for riders as they journey in autonomous vehicles.

Though officially introduced, there is already immediate interest in putting Olli to use on public roads. Miami-Dade County is exploring a pilot program in which several autonomous vehicles would be used to transport people around Miami.

“Improving the sustainability of local transportation networks as part of a wider goal to create more vibrant, livable, sustainable cities within Miami-Dade County, and improve the quality of life for residents is our top priority,” said Miami-Dade County Mayor Carlos Gimenez. “We must do more to improve transit and mobility in our community and the deployment of autonomous vehicles is a big step in the right direction.”

As part of Olli’s debut, Local Motors officially opened its new National Harbor facility in Maryland today to serve as a public place where co-creation can flourish and vehicle technologies can rapidly advance.

The company’s 3D-printed cars are on display, along with a large-scale 3D printer and an interactive co-creative experience that showcases what the future of the nation’s capital might look like. STEM-centered programming is also being developed for the facility so that the public can learn more about 3D printing, sustainability, autonomous technology and get involved with Local Motors engineers and the company’s co-creation community.

“National Harbor has a history of attracting unique and experiential shopping, dining and entertainment destinations, so we are an ideal launch pad for Local Motors,” said Jon Peterson, Principal of Peterson Companies, the developer of National Harbor. “We are excited to welcome Local Motors and play a part in the revolution of the transportation industry.”

Olli will remain in National Harbor this summer, and the public will be able to interact with it during select times over the next several months. The development of the cognitive rider experience in Olli is a collaboration between Local Motors and IBM Watson IoT’s AutoLAB, an industry-specific incubation engine for co-creation of cognitive mobility applications.

Production of additional Ollies is taking place at Local Motors headquarters near Phoenix.