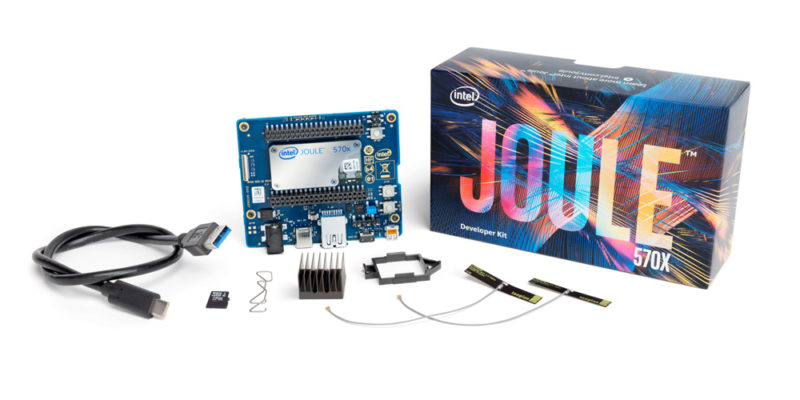 Intel Corp. announced Wednesday availability of the Intel Joule platform, a high-end compute platform capable of delivering human-like senses to a new generation of smart devices Created for the Internet of Things (IoT), the Intel Joule platform enables embedded developers and entrepreneurs to build out an embedded system or take a prototype to commercial product faster, while also minimizing development costs.

Targeted at developers who create products using Reference Linux OS for IoT can avoid force-fitting a desktop Linux OS into an IoT device, or having to create their own OS. Developers can also choose to develop on Ubuntu/Ubuntu Core (Snappy) or Microsoft Windows 10 IoT Core, and can take advantage of off-the-shelf libraries and peripherals to accelerate development.

The Intel Joule offers high-end computing and large memory in a tiny package and low power footprint, making it ideal for applications requiring abundant compute power but with limited space for compute hardware, like autonomous robots and drones. It supports Intel RealSense cameras and libraries enables developers to build devices that capture rich depth of field (DOF) information, which can be processed to create a high level of computer intelligence about the environment and objects within it, making a “thing” capable of autonomous behavior.

The platform offers laptop-class wireless communications with 802.11ac for extended range and bandwidth; comes with a development ecosystem consisting of Intel and its partners, which offers developers their choice of operating systems. Intel Joule platform is pre-certified for distribution and sale into more than 80 countries, enabling significant savings in the time and expense of pursuing certification.

As the Intel Joule platform is based on an Intel Atom SoC, transitioning a product design to high-volume production can be done with modest engineering expense, providing a mature platform for companies who require the option to scale down the road.

Modules and developer kits will be initially certified and available for sale in more than 80 countries, including the United States, Canada, Japan and most of Europe, with availability expected to extend to over 100 countries by the end of that quarter.