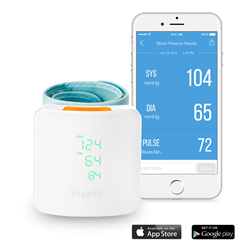 Connected health provider iHealth unveiled Tuesday its iHealth View Wireless Wrist Blood Pressure Monitor with a display screen that allows users to measure blood pressure and heart rate. With its sleek, compact and lightweight design, it is convenient for monitoring at home or on the go.

Available at a recommended price of US$99.99 at iHealthlabs.com, Amazon.com, Bestbuy.com, Bestbuy.ca and in-stores at Best Buy Canada, the iHealth View Wireless Wrist Blood Pressure Monitor is supported by a free iHealth MyVitals app, which is available for download on the Apple App Store and Google Play Store.

The iHealth View synchronizes to smartphones and tablets via Bluetooth 4.0+ with the iHealth MyVitals app. The app keeps track of historical data and provides a graph that allows users to better monitor and manage their blood pressure.

Results are also classified and analyzed according to World Health Organization (WHO) recommendations. Data is stored on the secure, HIPAA compliant iHealth Cloud. iHealth users can then share results with a doctor, caregiver or family member.

Clinically tested and FDA approved, the wrist cuff automatically detects and directs optimal arm positioning on the unit’s display screen for precise results. With the iHealth View, the user can take readings and see results on the device display.

“Patients” is a Virtue: How IoT and Remote Patient Monitoring are Revolutionizing Telemedicine