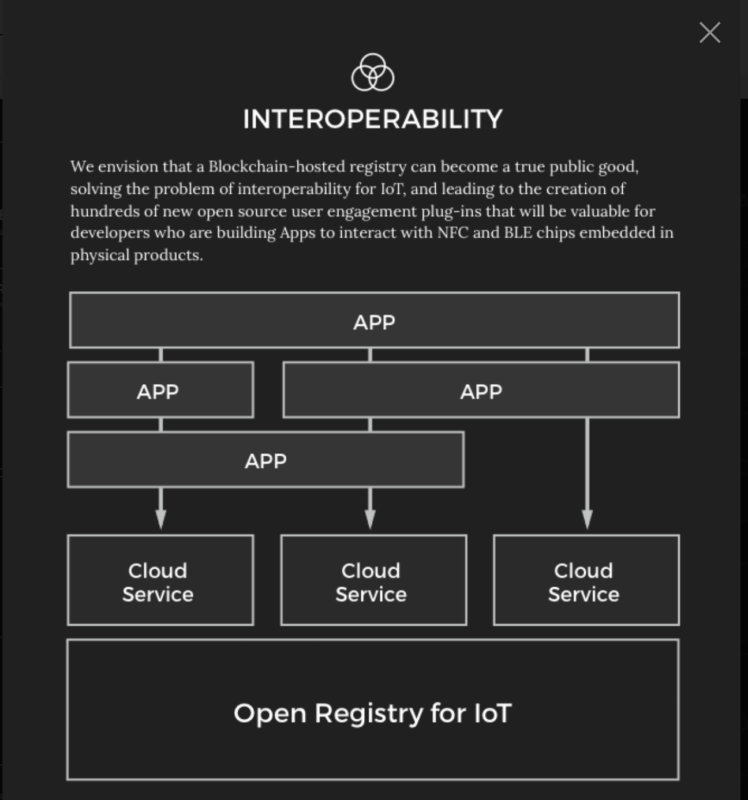 Technology company Chronicled launched this week an Open Registry for IoT, signaling a major step forward in the growth and interoperability of the consumer Internet of Things.

Built on the Ethereum blockchain, the registry stores the identities of physical items, initially consumer goods and collectibles embedded with BLE and NFC microchips. In doing so, a secure, interoperable digital identity is established and new, proximity-based consumer engagement opportunities become possible. Chronicled has open sourced the project under the Apache License.

The Bluetooth and NFC functionality currently supported by the open registry back-end allows brands and retailers to engage with consumers in ways that heretofore have not been available. Developers can now leverage identity and proximity verification of a physical thing as a basis for serving-up protected digital content and powering bespoke user engagement experiences.

For instance, a retailer could deliver a unique photo filter to customers who purchase a product from a particular store or a brand could push content, offers or rewards to loyal consumers wearing specific products in real time. Further, if an artist signs his painting with a digital chip, a patron’s smartphone could soon be used to verify authenticity and provenance, view exclusive content, and securely buy, insure, collateralize, or transfer ownership of the artwork.

“Chip companies, physical IP creators, and brands can now register and verify their BLE and NFC chips on a public blockchain,” said Chronicled CEO Ryan Orr.  “These tamperproof chips can be ordered today and are already being deployed in consumer goods.” Chronicled as deployed approximately 10,000 tamperproof NFC & BLE chips to date and has seeded the open registry in its role as sponsor.

“One of the main problems holding back growth in the consumer IoT market is interoperability,” said Daniel Cooley, senior vice president and general manager for IoT products at Silicon Labs. “By putting IoT chip registrations into private databases, today every brand is creating the equivalent of its own private cellular phone network or its own private email system that is not interoperable with any other network. We are excited that our Bluetooth low energy chip customers now have the opportunity to register and verify their chips on a public blockchain. This interoperable back end is a valuable building block and positive step for the entire IoT ecosystem including app developers, brands and consumers alike.”

“Developers are invited and encouraged to build their own proprietary applications leveraging the public registry,” said Samantha Radocchia, chief product officer at Chronicled. ‘Importantly, the registry is an open source layer and is not proprietary to Chronicled. It is a public good designed to outlive the lifespan of any company.  Brands, chip companies and developers utilizing the registry cannot be locked in, monetized or forced to cede control over business critical data and customer relationships.”