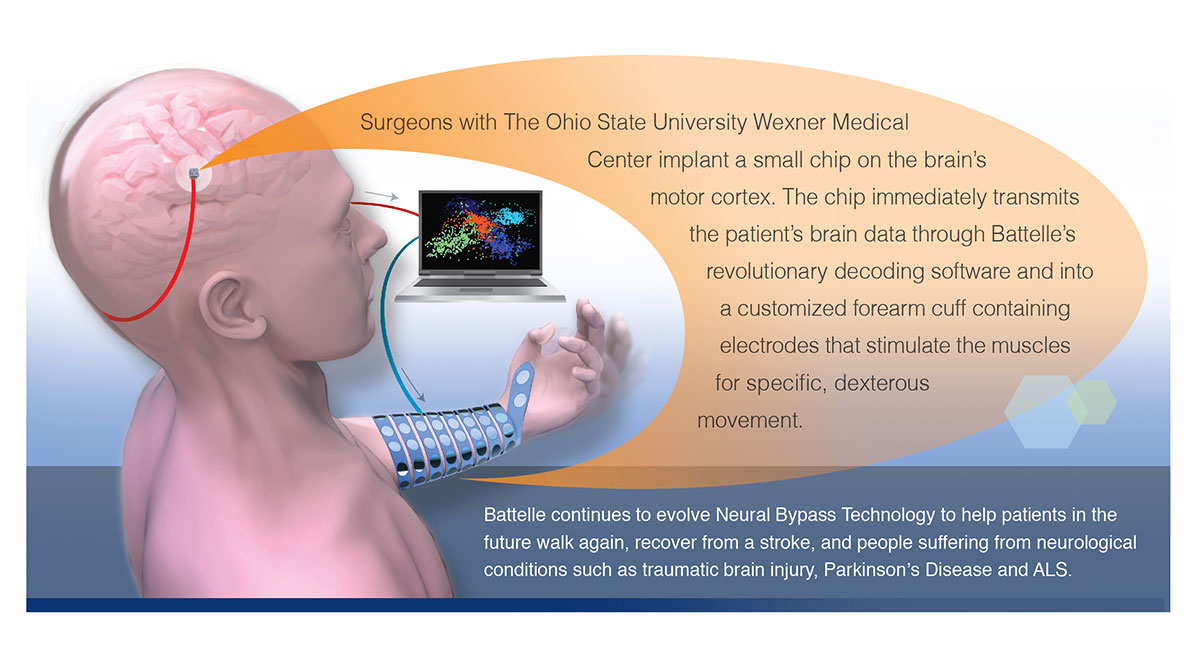 A device invented at Battelle has helped a 24-year-old quadriplegic from Dublin, Ohio, participate in clinical sessions during which he can grasp and swipe a credit card or play a guitar video game with his own fingers and hand.

Six years after getting paralyzed in a diving accident, the participant is now able to perform complex functional movements driven by his own thoughts and a prototype medical system that are detailed in a study published in the journal Nature.

The device called NeuroLife, was invented at Battelle, which teamed with physicians and neuroscientists from The Ohio State University Wexner Medical Center to develop the research approach and perform the clinical study. Ohio State doctors identified Ian Burkhart, the study participant and implanted a tiny computer chip into his brain.

This electronic neural bypass for spinal cord injuries reconnects the brain directly to muscles, allowing voluntary and functional control of a paralyzed limb by using his thoughts. The device interprets thoughts and brain signals then bypasses his injured spinal cord, and connects directly to a sleeve that stimulates the muscles that control his arm and hand.

Battelle has developed this technology that empowers paralyzed patients to regain conscious control of their fingers, hands, wrists and arms, while bypassing damaged areas of the nervous system so the brain can communicate directly with the muscles.

“We’re showing for the first time that a quadriplegic patient is able to improve his level of motor function and hand movements,” said Dr. Ali Rezai, a co-author of the study and a neurosurgeon at Ohio State’s Wexner Medical Center.

Burkhart first demonstrated the neural bypass technology in June 2014, when he was able to open and close his hand simply by thinking about it. Now, he can perform more sophisticated movements with his hands and fingers such as picking up a spoon or picking up and holding a phone to his ear — things he couldn’t do before and which can significantly improve his quality of life.

“It’s amazing to see what he’s accomplished,” said Nick Annetta, electrical engineering lead for Battelle’s team on the project. “Ian can grasp a bottle, pour the contents of the bottle into a jar and put the bottle back down. Then he takes a stir bar, grips that and then stirs the contents of the jar that he just poured and puts it back down. He’s controlling it every step of the way.”

The neural bypass technology combines algorithms that learn and decode the user’s brain activity and a high-definition muscle stimulation sleeve that translates neural impulses from the brain and transmits new signals to the paralyzed limb.

The Battelle team has been working on this technology for more than a decade. To develop the algorithms, software and stimulation sleeve, Battelle scientists first recorded neural impulses from an electrode array implanted in a paralyzed person’s brain. They used that recorded data to illustrate the device’s effect on the patient and prove the concept.

Four years ago, former Battelle researcher Chad Bouton and his team began collaborating with Ohio State Neurological Institute researchers and clinicians Rezai and Dr. Jerry Mysiw to design the clinical trials and validate the feasibility of using the neural bypass technology in patients.

“In the 30 years I’ve been in this field, this is the first time we’ve been able to offer realistic hope to people who have very challenging lives,” said Mysiw, chair of the Department of Physical Medicine and Rehabilitation at Ohio State.  “What we’re looking to do is help these people regain more control over their bodies.”

During a three-hour surgery in April 2014, Rezai implanted a computer chip smaller than a pea onto the motor cortex of Burkhart’s brain.

The Ohio State and Battelle teams worked together to figure out the correct sequence of electrodes to stimulate to allow Burkhart to move his fingers and hand functionally. For example, Burkhart uses different brain signals and muscles to rotate his hand, make a fist or pinch his fingers together to grasp an object. As part of the study, Burkhart worked for months using the electrode sleeve to stimulate his forearm to rebuild his atrophied muscles so they would be more responsive to the electric stimulation.

“Patients” is a Virtue: How IoT and Remote Patient Monitoring are Revolutionizing Telemedicine

Gone Viral: How IoT is Revolutionizing Healthcare in a Post-pandemic Era